I started this first Hall of Fear entry very differently until this gem of a tweet from Ben Carlson hit my timeline.

What Ben delivers here via humor, education, and sprinkled with a little accountability in four words is just….too good. (If you’re not familiar with Robert Kiyosaki, he’s the author of the 1997 bestseller Rich Dad, Poor Dad which, for me at the time, was a very good read).

Keep in mind, at the time these tweets were posted (September 26, 2021), U.S. markets spent much of their time in September going lower. In other words, the markets were already down, and here came a prediction from a fairly well-known “money guru” stating that markets will go on to crash in October.

We love these things, but we don’t take them seriously, because these types of predictions are worthless. They cost nothing to produce, nearly nothing to distribute, and you’ll see them from at least someone every single day. In many cases, you barely need to look.

Just loading today’s Marketwatch.com page (Oct. 26, 2021) and I see articles and opinion pieces having to do with:

I’m not sure reading any of this is helpful or useful. Some of it might be (the Harvard article seems promising), but how does one figure out what IS and what IS NOT useful to know or upon which to take action? There’s so much stuff to go through!

If we DO go looking (thankfully Katie did the legwork here), we might come up with a series of predictions/prognostications from the same author over decades.

Looking at these, we can say that, well, we did have a boom in the ’90s, but not much else turned out to be very accurate. Of course, the books sold well anyway.

How about a couple of other gems? Remember this one, published in October 1999 predicting the Dow Jones Industrial Average would rise to 36,000 by 2002-2004? This was published about 6 months before markets dropped as the tech bubble turned to the tech bust! You might note that we still haven’t seen 36,000 on the Dow (22 years later), but we’re finally close. 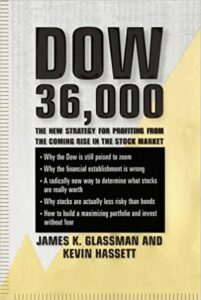 Or perhaps you remember the Malthuistic book, The Population Bomb from the ’60s, which predicted the world would run out of food because of, I suppose, extrapolating that the baby boom would go on forever and we’d never figure out how to get better at food production. The book’s now pretty widely known for its inaccurate predictions. 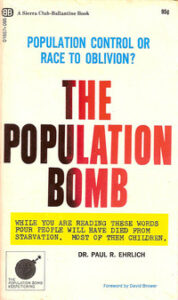 Ok, that’s probably enough, so let’s go back to the original interaction, to hopefully nail down the point. Here’s at least some history of the same author’s crash predictions. They span a decade now. Crash prediction, after crash prediction, without an actual crash. And then comes a little light for these predictions – this very short-lived moment in time – when a pandemic hits and – ‘finally!” in the eyes of the author, probably – markets drop quite a bit. It doesn’t last long and it’s for a reason the author (nor anyone) ever saw coming. 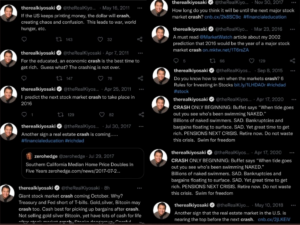 Hopefully, you get what’s going on here. Even a broken clock is right twice a day.

What I’ve listed here are just a few examples, and I’m not specifically picking on any of the authors (again, I LIKE Kiyosaki’s book!). But I want to use these examples to show just how worthless predictions of doom and crash can be. We’d also say the same for predictions of a major market “melt up”, too (they’re just not as fear-inspiring).

Following these types of bold predictions… getting “sucked in” can be very costly. The truth is that nobody can consistently predict the market’s next move. More often than not, it goes up. But sometimes it goes down. That’s the real headline. But it’s super-boring and doesn’t draw eyeballs!

The media’s job is to get clicks, readers, and sell ads. Don’t take it too seriously.

Here’s a link in case you want to read the introduction to Hall of Fear.