When Will the Stock Market Crash?

Many clients are asking about the next market downturn. We consider it one of our primary responsibilities to evaluate “what ifs” for the companies in our portfolios. We make it our job to prepare ahead and make informed decisions about what could hamper the overall economy and stock market.

To demonstrate how we think about this, let’s begin with a simple question: How often do market declines occur? Of course, there are different definitions, but generally, investors define a bear market as one where stock prices decline by 20% or more from recent highs. Historically, 20% market declines occur, on average, about every 2-3 years. The table below shows the frequency at which market ups and downs occur.

What can we learn from this?

Now that we see how the market fluctuates, why would someone invest at all? In short, it’s the best way we know to accumulate wealth over a lifetime. If you were lucky enough to have a family member invest $100 at the turn of the last century (the year 1900), that is now worth close to $10 million!

This graph includes significant global events—the Great Depression, World War II, a U.S. Presidential Assassination, the Tech Bubble, and the Financial Crisis. Yet, those events look like minor blips in the long-term trajectory of building wealth over a lifetime.

That said, we are mindful of the conditions that can exist before market corrections occur. Those include:

Some of these conditions seem present, or at least possible today. However, even if you get out of the market “on time,” time works against you. You’ll also have to figure out when to get back in, and that’s a tough decision to make.

It’s essential to understand how hard making two well-timed decisions really is. For example, the market peaked on February 19, 2020, as it became evident COVID-19 would significantly impact the global economy. If you timed that well, you avoided a 30%+ decline over the next month. However, if you didn’t get back into the market within six months, you would have missed out—big time. We’ve generally found that it’s MUCH harder to make that second decision as it typically goes against everything you believed in making the first decision!

Part 3: Use Time to Your Advantage

Let’s have a little fun with another question and ask; What would happen if you were the worst-timed investor? That is, you invested your nest egg at the peak right before the financial crisis (October 9, 2007) and sold everything at the bottom of the COVID-19 pandemic (March 23, 2020). Keep in mind that sounds and feels pretty much like the opposite of “buy low, sell high,” right?

However, that doesn’t consider one thing: TIME. As it turns out, time—in this case, almost 13 years, is still on your side. Even “buying high” and “selling low” (yikes), which is the exact opposite of what you want to do, ended up with 86% more money, which works out to about 5% a year. That’s not great, but it’s not bad for what seems to have been terrible timing—time in the market matters. 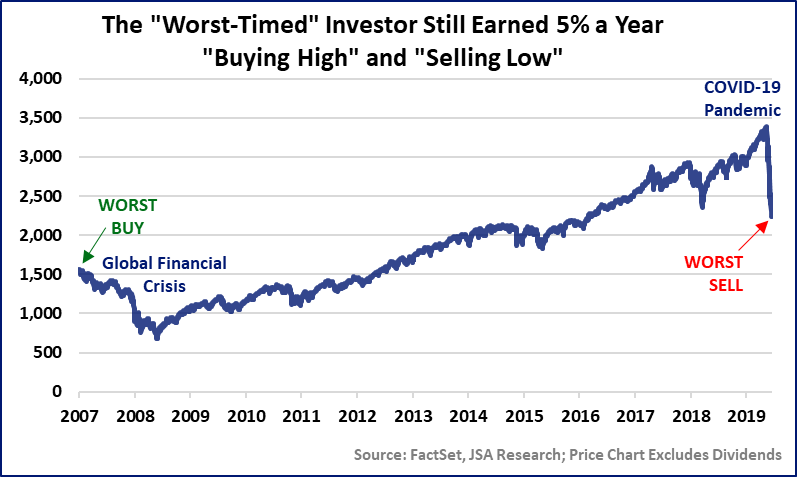 Jacobson & Schmitt Advisors, LLC (“JSA”) is a registered investment advisor. Advisory services are only offered to clients or prospective clients where JSA and its representatives are properly licensed or exempt from licensure. The information provided is for educational and informational purposes only and does not constitute investment advice and it should not be relied on as such. It should not be considered a solicitation to buy or an offer to sell a security. The information contained above is for illustrative purposes only.

The views expressed in this commentary are subject to change based on market and other conditions. These documents may contain certain statements that may be deemed forward‐looking statements. Please note that any such statements are not guarantees of any future performance and actual results or developments may differ materially from those projected. Any projections, market outlooks, or estimates are based upon certain assumptions and should not be construed as indicative of actual events that will occur.

All information has been obtained from sources believed to be reliable, but its accuracy is not guaranteed. There is no representation or warranty as to the current accuracy, reliability, or completeness of, nor liability for, decisions based on such information and it should not be relied on as such.

Past performance shown is not indicative of future results, which could differ substantially.