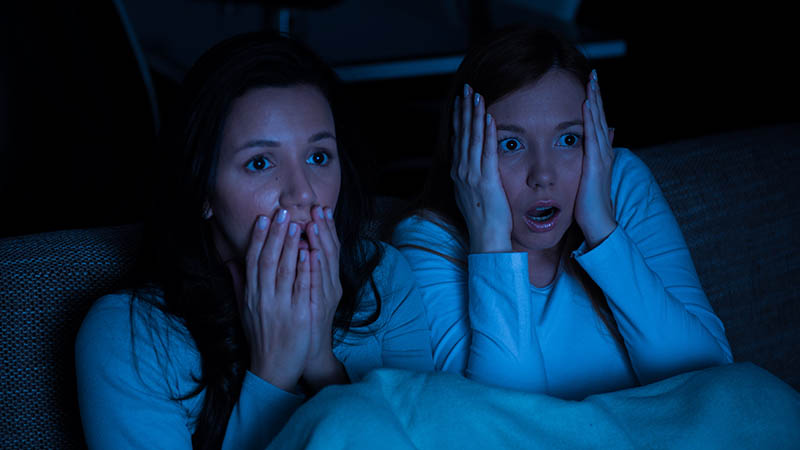 As markets moved lower in September 2021, we decided to write a piece about FEAR – because if there’s one comment we often hear, it’s that people are afraid of losing money in markets – ESPECIALLY when prices are falling. And the lower stock prices go, the more people become fearful (sort of the opposite of shopping where, the lower prices go the happier we usually are, right?)

While there are so many OTHER things that can go wrong with one’s personal finances, markets going down still seems to trump them all for many. That’s partly because we can look up stock prices every day whereas this is a little harder to do with your other “stuff” – home, car, boat, cottage, collectibles (even though they’re usually also going down at the same time). 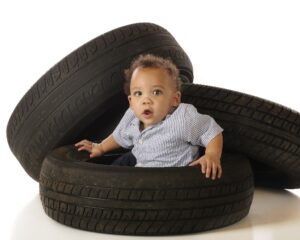 In the 1980’s, Michelin ran an ad campaign with babies sitting in tires, which tries to remind the viewer that car crashes can be dangerous (implicitly trying to market their tires as a way to keep your family safe). Many of you will remember the tagline – “because so much is riding on your tires”. Allstate uses the same technique with its decade-long (and still going) “Mayhem” campaign. Fear-based marketing makes a ton of sense in the insurance industry.

The basic idea is to use fear as a point to sell you something…where the “something” is a solution to your fear, or at least makes you feel better. It’s a classic sales tactic, and it works, REALLY well.

It’s also true that tragedy can strike unexpectedly, which is why we all need types of insurance. That’s certainly one type of risk.

In fact, there are many kinds of risks that exist in your personal finances – here are a few more (this isn’t a complete list):

If you look around, there really are things to be afraid of everywhere. That’s just life, and it goes well beyond finances.

Yet, when dealing with our finances, for some reason many people worry MORE about #5 above (investments going down in value) than many other things. We get it, seeing money go down in value, and perhaps feeling as if it’s out of one’s control is triggering…and that’s not lost on us.

The point isn’t to simply ignore FEAR. That’s not possible, especially since we’re hardwired to deal with fear so that it might save our lives. 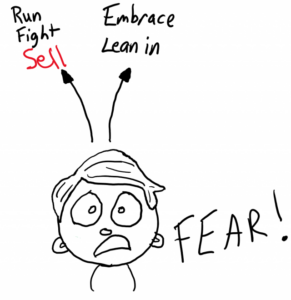 But the question is, when we’re fearful, which path do we want to take?

In many life situations, perhaps the run/fight mode is the right choice. In finance, that mode is named “SELL” or “PANIC” (I used sell and made it red in the picture on the right). Also on this path can include “buy this financial product from the smart-sounding, fear-selling salesperson”, which brings us back to the Mayhem campaign and fear-selling tactic.

Pick your path. In the other direction, we all have some life examples where we’ve chosen to go the other way and instead embraced, or leaned into a fear. Perhaps that was asking someone out on a date, changing careers, choosing a place to live or a university to attend and so on. In those examples, was it the right choice? Only you can answer that. But leaning in IS an option.

We often say around here that, ultimately, an investor’s emotions are tied to their eventual success (not adjusting for good or bad luck, of course). I’ve made reference to that before in “How to get lousy results”. Adam (in our office) gave us some numbers in early October 2021, too (which came from our quarterly letter we send out to clients). This idea that controlling emotions as a key to success is not just our view – Ian Cassel at MicroCapClub.com maybe summed it up best. 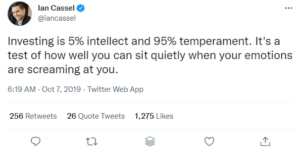 In a somewhat controversial 2017 presentation, C. Thomas Howard tries to put some analysis into just how expensive emotions can be to your finances. At the 37-minute mark, Howard talks about “leaving $8.5 million dollars on the table” as risk (it carries to the 40-minute mark, 3 minutes in total).

It’s important to understand that what Howard’s talking about only refers to the long-term portion of a portfolio here, so it’s not like “non-stock” investments aren’t useful. It’s just that they’re typically for other things – sometimes even if just emotional hedges (which have their own costs too).

Here’s one other way to look at this, with a bit more global perspective (thanks to Andy Hart at www.humansundermanagement.com). There are always crazy things going on in the world, and yet, investors seem to do quite well over time. In other words: investors, over time, have made money “leaning into their fear”.

Is it (maybe even a little bit) possible that you need MORE fear in your portfolio?

Read on for Part 1 of “Hall of Fear” – The Media, Internet, & Predictions 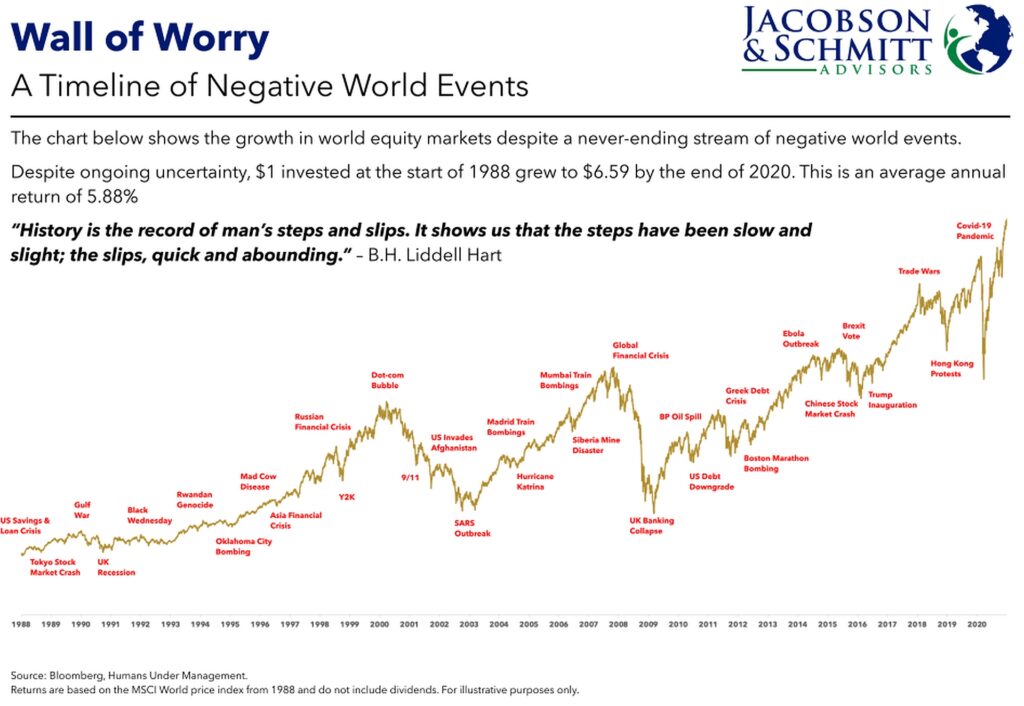